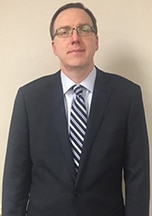 Since graduating from St. John’s University School of Law in 1992, James Lundy has always practiced in the area of personal law. Over the course of his career, he has successfully handled a wide variety of cases including general negligence, construction accidents, medical malpractice, medical devices, pharmaceuticals, asbestos, lead paint, and other toxic torts and product liability. He met the firm’s founder Richard M. Kenny in 1992 while employed as young associates at Sullivan and Liapakis. They formed a close bond based on shared values and a commitment to protecting the rights of the seriously injured.  Throughout the years while working at different firms, the two continued to work on matters as co-counsel.

Prior to joining the firm in September 2010, James Lundy was counsel at Wilentz, Goldman, and Spitze handling asbestos, lead paint, toxic tort, pharmaceutical, and medical device cases. While there, as co-trial counsel, he obtained a $4.5 million verdict on behalf of several lead-poisoned children and obtained millions of dollars in compensation for victims of asbestos exposure and harmful pharmaceutical products.

Since joining the Law Office of Richard M. Kenny, his successes are many. In just 18 months he has obtained compensation of $3.15 million in combined architectural malpractice, construction project, products liability and negligence case; $1.5 million in a motor vehicle accident case; one million dollars in a personal injury action arising out of a fire in an apartment complex; $760,000 in another fire case; and $985,000 in a medical malpractice case.